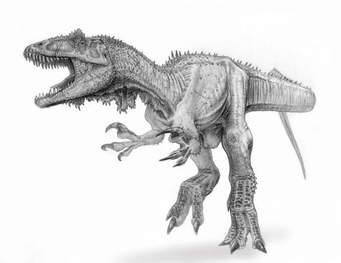 This Dinosaur was from my childhood and i like this Dinosaur!It had horns that it battles with,when i was watching Dinosaur movies i always saw a Triceratops in the movie and it still showed up in movies to this day!

When i watched Jurassic Park i always liked the Deinonychus,and yes it was a Deinonychus,the director put the name Velociraptor cause it was more fearsome,it was agile and smart!I liked the scene where both of them chased the kids into the kitchen and the final battle was amazing!

This Dino is very cool in my opinion,it was in Jurassic Park 2,i had toys of it and i basically liked how it swiped its tail around to defend itself.

This Dinosaur is the first one i ever knew and my favorite one,but then i found Dinosaurs which made me change my mind about favorite Dinosaurs,it might be confusing for you guys because he's  N.7.

This one is the Dino which made me change my mind,i liked him more than the T-Rex because Albertosaurus came first,but still this Dinosaur is amazing!

Who would you expect more than this guy,not many of you know that i like this Dino,but the skull of this Dinosaur was amazing,this Dino bashes its head into a wall to break it,its like a bulldozer hitting a wall!This Dino is fast and cool!

Spinosaurus was the Dino that killed the T-Rex and had a scary roar,the spine on his back made him even cooler,but usually i was afraid of this Dino and never liked him,but now i like him,his skeleton looks like the real Dino,it also was bigger than the T-Rex and it also had bigger arms,and thats why i like him!

This Dino is my favorite because he is agile,strong,he hunts in packs and because he looks cool,he was a big part of my childhood!I always liked him,i never said anything bad about him,he was the coolest Dinosaur in my opinion and the most fearsome!

14 Responses to My Top 10 Favorite Dinos!

I forgot to mention but i love all the Dinos,but i still have favorites!

Oops,i corrected the thingy,i liked Deinoninychus but i never knew he was the Raptor from Jurassic Park.

I acutally digged more research into Deinonychus and i found out that it was cooler than Velociraptor.

Thanks for the fact.

Utahraptor is a lot bigger than Deinonychus, and bulkier. That's one of my favorite Dromaeosaurs, if not my favorite. Also, raptors wouldn't have been as smart as they are said to be in the movies. Still could probably open doors though (with handles).

@James Inkton,  it wasn't just Spielberg who consciously chose a different name.  Crichton did it too when he was writing Jurassic Park for the same reason.  But one unconfirmed explanation was that along with consulting with John Ostrom about Deinonychus, he used a lot of Gregory Paul's material when writing the novel.  During the 1980's, Paul actually pushed for Deinonychus antirrhopus to be classified under the genus Velociraptor, and thus wrote several books under the new name.  Then it was refuted, so Paul retracted the initiative, but by then, Crichton's novel was set to be published.

The odd thing though is that even though the body shape of JP's raptors is based entirely on Deinonychus, the size and length of the animal are larger than any known Deinonychus specimen, even though some sources say otherwise.  JP's raptors are around 12-15 ft long and are 5.5 feet tall at the head in a neutral posture.  The largest Deinonychus specimen was 11 ft long and 4 feet tall at the head in the same neutral posture.

It's like a Deinonychus that lost its feathers and bare skin and grew to the size of a Dakotaraptor.

I like to think the JP raptors are Dakotaraptors

I like to think of Dakotaraptos as feathered JP Velociraptors but not killing for sport or pack hunters... or more intelligent than an actual Velociraptor (or a turkey).

I still like velociraptors, even with feathers and tiny. They're just really cool! They're my favorite dinosaurs.

@TheLazyFish You do know that the Jurassic Park dinosaurs are genetically altered right, not to mention fictional. You don't have to keep making jabs at Jurassic Park

Oh I know, and it's an affectionate jab. It's my favorite movie BY FAAAAAAAAAAAAAAAR

JUST STOP WITH THE FREAKING CONFLICTS,THIS WAS ABOUT MY FAVORITE DINOS NOT ABOUT TOP 10 BIGGEST CONFLICTS.