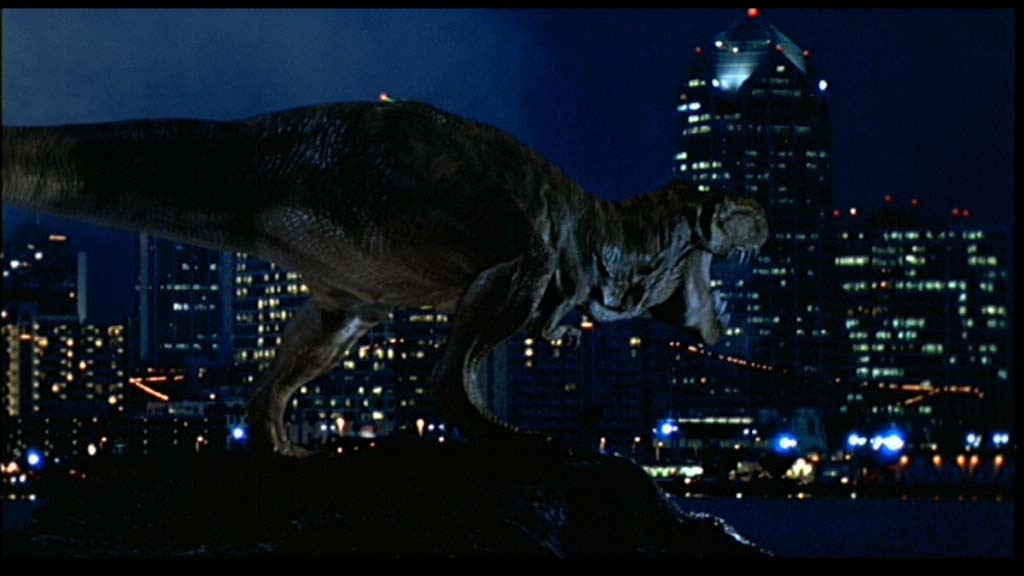 The Carcharodontosaurus tore a piece of flesh out of the Paralititan.  He had made his first kill in days, and it had been easy.  His mate ate it with him.  They continued to feast at the shore of the lake.

Meanwhile, a pair of Tyrannosaurus Rex prowled through the forest.  They were starving, so they split up.  The male, Tyrannus went alone while the female, Tyranna stayed with their son.

A while later, the two Carcs were resting, just as Tyrannus arrived.  He spotted the Paralititan and began to approach, but the two Carcs stood in front of it.  They roared at him, but he refused to back down, charging.  The male Carc charged, and the two banged heads, with the T-Rex pushing him back.  He then knocked him over, stomping on his side.

But the female came in, biting the enemy by the neck.  He clamped down on his attacker's throat, swinging her around.  The other Carc recovered, joining his mate and biting his shoulder.  However, the T-Rex bit his skull, slamming him into the other Carc.  The two toppled over each other, struggling to stand up.

This allowed the T-Rex to chomp down on the female's neck, shaking her like a rag doll.  She roared in pain, but the T-Rex silenced her by crushing her skull, growling, "Silence, peasant!"

The male Carc watched in horror, then attacked his injured opponent.  His jaws gripped the T-Rex's throat, slamming him into a tree.  He then grabbed him by the skull, swinging him around.  The enraged Carc, his enemy between his jaws, used his large head to push him to the ground.  The T-Rex, too weak to get up, waited to be put out of his misery.  Suddenly, the ground began shaking.

The female T-Rex arrived with her son, staring menacingly at the Carc.  She let out her tyrant roar, sending ripples through the lake and shivers up the Carc's spine.  She charged, gripping his leg and knocking him over.  She dragged him around, slamming his head into rocks and kicking him.  Her mate got up, walking over to the Carc.  He grabbed his neck, but the Carc raised his arm, taking out his right eye.  The T-Rex only bit harder, crushing his foe's windpipe.  He and his mate had won, feasting on the Paralititan with their son. Today, the strength of a mate won the battle!

Nice fight, everyone knows who I was rooting for.

NorthStar just cast their vote on the Poll: Riot versus Carnage - Which Symbiote would win in a fight?
More Activity