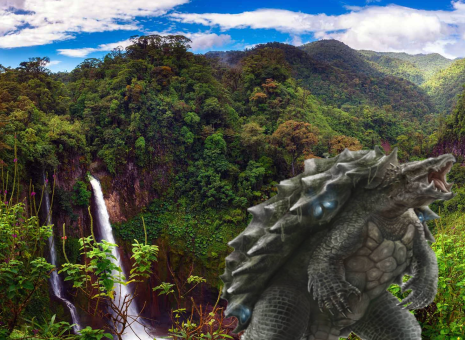 It was a new dawn in the hollow earth, titanic fish swam in the lakes and rivers while warbats stalk around the various hills and mountains searching for prey. A Titanodontognathus bassi bursts from the north-side of the hollow earth. Resembling a cross between a sturgeon and a flying fish escapes the water from a hungry Godzilla's jaws. The fish flapped its powerful flight fins to escape from the massive radioactive dinosaurs jaws. Godzilla returned back to the water's cold depths as the flying bass escaped.

The kaiju bass starts swimming in the air to feed on the flying bubble seeds. It then quickly joins a whole school of Titanodontognathus as they swim through the space between. A loud scream echoed across the hollow earth, the Titanodontognathus school suddenly switched directions as a massive set of tusked jaws came swooping to gobble the bass kaiju whole

OH MY FREAKING GOD,THIS IS THE BEST THING I HAVE SEEN ON THIS SITE I SWEAR.

Ok Goji i will send you the topic of Chapter 11 so you can put your final touches.