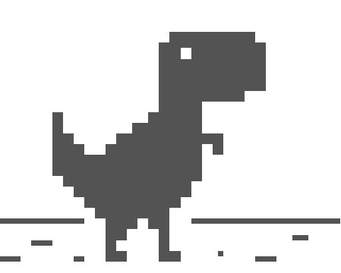 Hey guys,i don't feel good,the only game i can play is the Google Rex game,i found a way to make it creepy,its just a Creepypasta and its not real.

There is no internet connection

-''Dang it!Why is there no connection"?

I then sat down on the chair in my room and watched some Sci-Fi TV shows like "Power Rangers".Then i heard a weird sound coming from the computer:

-"Mn'okay...whatever happened to the comput-"

I slowly moved to the computer and pressed space,then the Google Rex game started,but something was off about it,there were Dino skeletons on the ground...And dismembered Dinos on the cacti.

I just wanted to leave the computer...But,i couldn't move a bit,all i could were my right hand's fingers,put the fingers could only move down,meaning i could only make the Google Rex jump.

While i was playing more and more,i started getting dizzy,then i saw a thing in the game,the Rex fell in a hole,that somehow was red.

When i fell there,i could not just stare at the game,i saw a screen that said:

You are not allowed to be here,you could if you were to DIE!

And besides the picture were...My favorite Dinos getting dismembered and tortured.

And then,i saw something i could not bear to see,it was...Something that looked like the Google Rex,but with long and large hands,sharp teeth covered in blood,and tail full of spikes...

Then the hellish looking Dinosaurs ran to me at full speed and i had to jump to avoid or else,in his words,continuing the sentence from before.

-"GO FOR IT OR YOU ARE DEAD MEAT,IN REAL LIFE!"

He then did not respond became a gigantic Dino that shaked the ground,hands came out of the sand,Dino skeletons became alive,and the dismembered Dinos started to recreate themselves to become nightmarish looking Dinos.

I didn't say that much things about myself,but that Dino Demon might be my...Well,dead small brother,i did not pay attention to what he was doing at a Museum,and some Dino Fossils fell on him,brutally killing him.Then the Demon Dino proceeded to say:

But the Google Rex did not die,then i noticed how to defeat the Demon Dino,i needed to,pretty much,just kill all the enemies,the way i could kill them was to jump when they ran to me,then wait for a cactus to destroy it.

I then proceeded to eliminate all of the enemies,the remaining one was the Demon Dino,he spit out lava to try to kill me,but then a lot of cacti made him trip,i tried to jump over him,but i couldn't.

Now i can confirm this is my brother because he knew my real name.

I found a way to kill him,i got grabbed by him but i managed to escape,i could have collected fossils,i gathered them all and i somehow hopped on some U.F.Os that suddenly appeared.

Then i got a screen:
Maybe you are allowed to be here,but its better to leave this game

If you ever get anything like this,i say you better have an Internet Connection.

c00l. Did you take some inspiration from NES Godzilla Creepypasta?

n0ice, NGC is one of my favorite creepypastas.

Reminds me of the NES Godzilla creepypasta. I think it was pretty good, but it wasn't really scary to me. I think if you were to add more suspenseful scenes and elaborate more, this could be a pretty interesting thing. Also, try to build up to the reveal that there is something wrong with the game, like minor things going wrong, and then the skeletons come up and at only that time does the voice come.

Okay!! We get it! It's your first creepypasta! You have one heck of an imagination.

Did i just spam by mistake,hope someone deletes them.

It's not Ganimes' fault. He must have accidentally clicked the button too many times, so that's why there's so many repeats of the same post. Like how we all keep accidentally posting the same comment twice due to system errors, accidental double clicks, etc. Never seen that many though. Has to be some kind of record lol