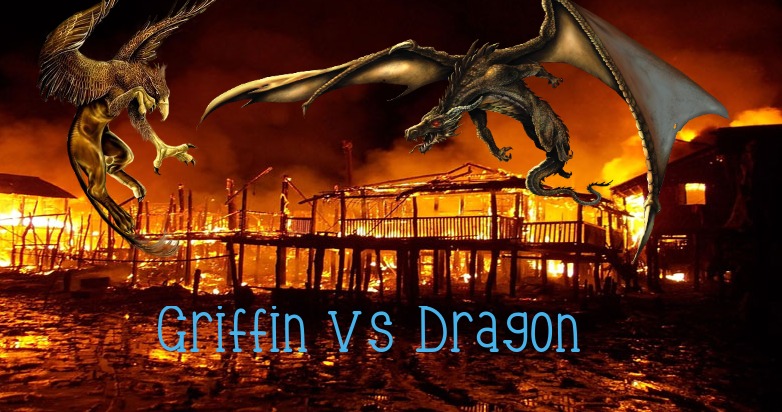 Ok, I know it has nothing to do with sci-fi, BUT I want to show people this and have no where else to put it. And in my defense, Syfy played a Harry Potter marathon once. And I payed lots of homage to Mothra/Godzilla as a whole if you can tell. Anyways, hope you enjoy. Of course, credits to Goji again!

“RRROOOAAARRR!!!” The dragon stomps on houses. The armored soldiers’ weapons do nothing to its thick scales. The beast inhales and its chest glows orange. Then it spits out a stream of fire, the homes burning to the ground as woman clutch bundles of blankets and their husbands run as fast as they can. It’s 50 feet tall on all fours, and 100 feet long. One of the biggest creatures they have ever seen. Two sorceresses squeak in unison, “It is he whom has returned! He has come once again to eradicate our kingdom!” The twins rest their bodies, as they know what to do. They walk to a large bronze statue in the shape of a fearsome creature….

They walk to both sides and put one hand on it. The sisters close their eyes and sing a tune:

A deed is needed done

We need your aid

A kingdom you must save

We need you, o mighty one.

They slowly open their eyes and press the statue lightly. Yellow magic flows around the witches. The structure gleams with copper-gold color.

Winner: Dragon. He was larger, stronger, and had hotter fire. I do love griffins tho.

Hope you enjoy. I know it’s a bit long. Like I said, I know it’s not sci-fi, but uhh...I guess fantasy and sci-fi sometimes get grouped together. Byyyeee~

Btw, my next fight will have DRAGONS too

The battle of le

you were a good guardian

then you died+ I fixed some typos

I'll allow this because it's obvious you worked hard on it, and I will ask Chris if he is willing to make a separate page for fan fiction posts (since a lot of you seem very interested in creative writing). Please try and not create too many posts like this on Scified for now though, until I can find a proper place for you to post them. If you must post, try and keep them on topic and to the appropriate forums. Thank you for your understanding, if you have any questions feel free to PM me!