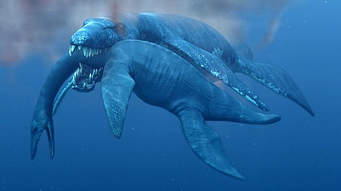 The uncooked shrimps when the titanic went down Vs. Pliosaurus (Predator x) (EAB Bonus Battle)

This is a bonus battle of EAB,EAB stands for Epic Aquatic Battles.

The information about The uncooked shrimps when the titanic went down:

The information about Pliosaurus (Predator x):

Pliosaurus is an extinct animal which lived approximately 150 million to 145 million years ago during the Late Jurassic Period. It was first discovered during the mid-19th century and described and named by Richard Owen in 1842. Its name means “Pliocene lizard” in Greek.

Pliosaurus pictures make this animal look very much like some kind of prehistoric crocodile, even though that is not the case and it actually belongs to the Pliosauridae family, although the whole family is what paleontologists like to refer to as a “wastebasket” taxon – which means that if there are any Pliosaurs which can’t be classified, then they are usually placed within this group.

Pliosaurus gave its name to the whole taxon, so it shouldn’t be too surprising that its features are what paleontologists look for in a member of this family. Which is a large head with heavy jaws, a pretty chunky trunk and a short neck. This is very different from its opposing taxon, Plesiosaurs – which have long necks, small heads and streamlined bodies.

Pliosaurus was approximately 40 feet long and weighed around 30 tons or about 60,000 pounds. That made it about the length of a Sperm whale, but only about the weight of a Humpback Whale. Which would have made it a feared predator of any fish which dared to cross its path. However, being one of the biggest doesn’t mean that you’re the safest.

Paleontologists believe that there were several reasons why this animal went extinct. First of all, Mosasaurs came on the scene at about this time and competed heavily with Pliosaurus for its main food source – fish. That’s because Mosasaurs were faster and agiler than Pliosaurus. They were also more vicious animals. This was just enough of an edge for them to out-compete Pliosaurus for fish. Second, water temperatures began to change during this time and this creature may not have been able to adapt quickly enough. Which is probably why this animal went extinct some 145 million years ago.

So the titanic was sinking,the uncooked shrimps were ok,at that moment but then,a Pliosaurus came infront of them,Plio was ready to eat them,but he couldn't,because they all fell at the bottom if the titanic,The shrimps combined themselves and made a bigger shrimp,which tail swiped the Plio,Plio has got enough,and tried to eat the Shrimps,because they tail swiped him again,he got pushed back,and then Plio got stuck in the propeller,and that caused Plio to die,The uncooked shrimps won!

Winner:The uncooked shrimps when the titanic went down

27 Responses to The uncooked shrimps when the titanic went down Vs. Pliosaurus (Predator x) (EAB Bonus Battle)

I pretty much copy and pasted Plio's information from Megalodon Vs. Pliosaurus (EAB Part.1)

Which is also made by me.

The uncooked shrimps when the titanic went down killing the Pliosaurus be like:

Guys,im about to go somewhere,so i won't be on Scified.

Done being jolly, time to be naughty, think it's time we settle up the score; Fill up the wishlist, let's cause some mischief- grab my keys, I'm headin' out the door

also i dont think shrimps are that smart

Done being jolly, time to be naughty, think it's time we settle up the score; Fill up the wishlist, let's cause some mischief- grab my keys, I'm headin' out the door

i told you guys that the shrimp were OP

so why is it a good thing the Titanic sank and all those people died?

Cause humans don't give a single thing about animals,we have enough humans,i only like animals,if you were a animal,and you see that a human doesn't care about you,and instead he dumps some stuff in the ocean,and he works somewhere where there is pollution,is that good for animals?They were stupid enough to just let only the 1st class to escape,so humans don't care about other humans,animals and sea animals,is that how you help the animals,pollution,throwing garbage in the ocean,is that how you save Nature?

If humans keep on eating shrimps,shrimps will be extinct.

'if humans keep on eating shrimps,shrimps will be extinct'

I don't eat marine animals,by extinct in meant that we might eat all the shrimps,with none remaining.

Just like with the Dodo,they hunted the Dodos,and thats how they became extinct.

NO.... the Dodo did not go extinct solely on hunting.it went extinct in part due to the destruction of their natural habitat which contributed to its extinction. plus we can observe that it no longer exists due to no one in our natural habitat seeing them. so how would we ever know for sure the shrimp has become extinct when we cannot observe all of the oceans all of th time as it is not our natural habitat?

anyway, do you actually believe that all the uncooked shrimp combined into a massive single shrimp and fought an extinct Pliosaurus?

and whats wrong with eating shrimp? are you going to argue with a chimp on its diet? or campaign for tigers to go vegan? we eat meat. 95% of the worlds population eats meat. its not a fad so its something we have done for millennia

Have you heard of fan fiction,i don't wanna have a conflict.

The uncooked shrimps when the titanic went down is a meme,and on the internet,Memes rule.

Im not arguing about that,i just mean that i don't like the taste of shrimp and i don't want to eat them.

''By your logic,if lions eat antelopes,the antelopes will be extinct.

hey I hear u. a comic would be cool with illustrations

Still, it's not exactly right to say it's a good thing a bunch of people died in a tragic accident...

I forgot to add something to that,sorry,i wanted to make it like this:
#ITSGOODTHATTHETITANICSANKFORTHESHRIMPS

I remember a giant Shrimp criptyd...

Anyone know what it is calld

Thoughts_Dreams 77% To Next Rank
Respected

7amey replied to You think Son of Kong will be the next film?

Jack Capellini started a new discussion: You think Son of Kong will be the next film? on the Godzilla Movies forum

Chris posted a new editorial: Respawn has discontinued all sales of Titanfall but will keep servers online!