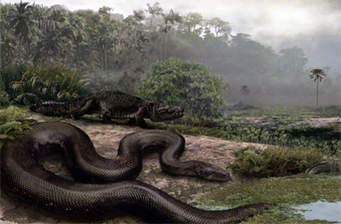 Deinosuchus was a prehistoric crocodile which lived approximately 80 to 70 million years ago during the Late Cretaceous Period. Its fossils – which originally consisted of just two large teeth – was first discovered in the mid-19th century by a geologist named Ebenezer Emmons. When he discovered them he placed them in the same category as Polyptychodon – a dinosaur species he thought was a species of crocodile-like reptiles. However, as more fossils were unearthed, it became clear that Polyptychodon was actually a pliosaur, so Deinosuchus was placed into its own genus in 1909. It was then given its own name, a name which means “terrible crocodile” in Greek.

If you looked closely at Deinosuchus pictures, then you would most likely agree with the name “terrible crocodile” because it was indeed one. It was approximately 33 feet long – or about twice the size of a saltwater crocodile, and weighed around 10 tons – or 20,000 pounds! It also had a very large head that was about 6 feet long and filled with many razor-sharp teeth. It would have been a terrible crocodile for any of its prey to run across and that’s for sure.

Of course, paleontologists really can’t tell how large these crocodiles grew. That’s because they continued to grow their entire life – much like modern crocodiles do. In fact, they would have grown about a foot a year during their lifetimes. Which means that it is quite possible they grew even larger than 33 feet, especially if they lived as long as a modern saltwater crocodile – which is about 70 years.

Being so large, Deinosuchus probably could have had its pick at what it wanted to eat. Most likely, it would have lived off of shellfish and fish that it found in the water, dead animals that it could have scavenged and maybe even land animals. It is also quite possible that this prehistoric crocodile may have eaten the occasional dinosaur every now and then.

Titanoboa is an extinct snake which lived approximately 60 million years ago during the Paleogene Period. Its fossils were first discovered in coal mines in La Guajira, Colombia in 2009. Later that year, it was given its name – a name which means “titanic boa.”

If you look closely at Titanoboa pictures, then you can clearly see just how huge this snake really was. It was approximately 50 feet long and weighed around 2,500 pounds. To put that into perspective, that is twice as long as the longest snake living today and 4 times as heavy as the giant anaconda. It is definitely a snake that you wouldn’t want to meet.

One of the most interesting facts about Titanoboa is that while it looked quite a bit like a modern-day anaconda, it most likely didn’t hunt like one. Modern anacondas hunt by wrapping themselves around their prey and constricting them to death. Titanoboa probably didn’t do that. Most likely, it sneaked up on its prey and with one quick strike, bit them in the jugular. That would have allowed it to consume it meal at its own leisure.  However, like a boa, it was capable of constricting on its prey when necessary, although it wasn’t its first option.

Why did this prehistoric snake grow so large? Well, the fact of the matter is that the area in which it lived contributed to its growth. During this period of time in Columbia and Peru – the part of South America in which this snake thrived – it was very hot and humid. In fact, temperatures would have been in the 90s all of the time. Which is really beneficial for cold-blooded reptiles like Titanoboa. Cold-blooded reptiles always grew much larger sizes in areas which have both high temperature and high humidity.

Another fact about this reptile is that it was a carnivore which preyed on a variety of different animals. It could have eaten a variety of smaller reptiles and birds, and may even have hunted crocodiles! It certainly would have been big enough to hunt them.

19 Responses to Deinosuchus Vs. Titanoboa

Most of the  topics that i dig research into are being ignored by a lot of people,except TheLazyFish,The True Shark Boy and GmkGoji,shoutout to them!

Good versus match, also what’s your opinion on the fight? My opinion would be that Deinosuchus would kill titanoboa.

What source did you find where it said that sarcosuchus was 50 feet and 15 tons?

It was something about some adult Sarcosuchus having more than 10 tons and bigger than 43 and 40 feet.

This is one of my best topics.

It was a hard decision.

There are not that much things to do more than making topics.

Also, the reason that we're the only ones replying is because there aren't that many active members of the Dinosaurs Forum at the moment, and some of them are on only every now and again because they have stuff to do in real life. For example, my first 6 or so fights never got a comment lol

Actually... I still get few comments lol, not that I'm complaining.

Maybe....? I'm honestly not sure... Did it get reduced in size since the Titanoboa do***entary came out? lol

Yes it did actually

Oh... well, that makes it more in favor for Deinosuchus then, unless Titanoboa could hunt crocodiles as successfully as it's relative the Green Anaconda, then it would be heavily skewed for Titanoboa. However, seeing as it was probably a piscivore, I think it's unlikely. The winner is, in most cir***stances, Deinosuchus.

Also, the Tyrannosaurus V.S. Torvosaurus fight should be done and ready to post within the hour. Sorry it took so long, but because of my carelessness the story got wiped when it was near completed TWICE!!! I have written this fight 3 times at this point... So sorry for my carelessness lol. Next time I write, definitely doing it on a google doc first lol. Anyways, sorry it took so long!

There’s no official evidence to suggest that a 43 foot crocodile lived along side titanoboa, let alone exist

Sorry, got misled by (another) do***entary lol. Also... might take an extra 10-20 min to get the fight up sorry lol. DEFINITELY TONIGHT THOUGH