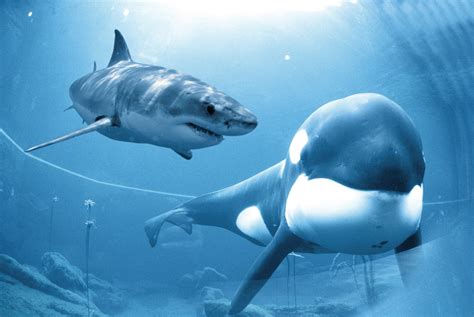 The Great White Shark Vs. Orca (A.K.A The Killer Whale)

About the Great White Shark

The legendary great white shark is far more fearsome in our imaginations than in reality. As scientific research on these elusive predators increases, their image as mindless killing machines is beginning to fade.

Of the 100-plus annual shark attacks worldwide, fully one-third to one-half are attributable to great whites. However, most of these are not fatal, and new research finds that great whites, who are naturally curious, are "sample biting" then releasing their victims rather than preying on humans. It's not a terribly comforting distinction, but it does indicate that humans are not actually on the great white's menu.

Great whites are the largest predatory fish on Earth. They grow to an average of 15 feet in length, though specimens exceeding 20 feet and weighing up to 5,000 pounds have been recorded.

They have slate-gray upper bodies to blend in with the rocky coastal sea floor, but get their name from their universally white underbellies. They are streamlined, torpedo-shaped swimmers with powerful tails that can propel them through the water at speeds of up to 15 miles per hour. They can even leave the water completely, breaching like whales when attacking prey from underneath.

Highly adapted predators, their mouths are lined with up to 300 serrated, triangular teeth arranged in several rows, and they have an exceptional sense of smell to detect prey. They even have organs that can sense the tiny electromagnetic fields generated by animals. Their main prey items include sea lions, seals, small toothed whales, and even sea turtles, and carrion.

Found in cool, coastal waters throughout the world, there is no reliable data on the great white's population. However, scientists agree that their number are decreasing precipitously due to overfishing and accidental catching in gill nets, among other factors, and they are considered a vulnerable species.

The Orca (A.K.A The Killer Whale)'s size and information:

Weight: Up to 6 tons

Orcas, or killer whales, are the largest of the dolphins and one of the world's most powerful predators. They're immediately recognizable by their distinctive black-and-white coloring. Smart and social, orcas make a wide variety of communicative sounds, and each pod has distinctive noises that its members will recognize even at a distance. They use echolocation to communicate and hunt, making sounds that travel underwater until they encounter objects, then bounce back, revealing their location, size, and shape.

Though they often frequent cold, coastal waters, orcas can be found from the polar regions to the Equator. They're at the top of the food chain and have very diverse diets, feasting on fish, penguins, and marine mammals such as seals, sea lions, and even whales, employing teeth that can be four inches long. They are known to grab seals right off the ice. They also eat fish, squid, and seabirds.

Orcas hunt in deadly pods, family groups of up to 40 individuals. There appear to be both resident and transient pod populations of orcas. These different groups may prey on different animals and use different techniques to catch them. Resident pods tend to prefer fish, while transient pods target marine mammals. All pods use effective, cooperative hunting techniques that some liken to the behavior of wolf packs.

Orcas are protective of their young, and other adolescent females often assist the mother in caring for them. Mothers give birth every three to ten years, after a 17-month pregnancy. They give birth to one baby at a time, which may nurse for up to two years. In most cases, the bond between juvenile and mother will eventually weaken, and the young orca will go its own way, but in some pods, the juvenile may stay with the pod it was born into its entire life.

Orcas are highly intelligent, social mammals that have long been a part of marine park entertainment, performing shows for audiences. However, it's become increasingly clear that orcas do not thrive in captivity.

They have evolved to swim up to 40 miles a day, foraging for food and exercising. They dive 100 to 500 feet, several times a day, every day. Whether they're born in the wild or in captivity, all orcas born have the same innate drive to swim far and dive deep. Artificial enclosures in captivity cannon offer that kind of range to orcas, contributing to boredom and stress. Orcas have been seen to develop stereotypies, also known as zoochosis—repetitive patterns of activity that have no obvious function, which range from self-mutilation to rocking and swaying. Usually related to stress and inappropriate habitats, stereotypic behavior has been do***ented in orcas in scientific research since the late 1980s.

In the wild, orcas live in tight-knit family gropus that share a sophisticated, unique culture that is passed down through generations, research has shown. In captivity, orcas are kept in artificial social groups. Captive-born orcas are often transferred between facilities, breaking up social relationships. The stress of social disruption is compounded by the fact that orcas in captivity don’t have the ability to escape conflict with other orcas, or to engage in natural swimming behaviors in pools.

In 2013, the do***entary film Blackfish laid bare the psychological toll of captivity, through the story of a wild-caught orca named Tilikum who had killed two trainers at SeaWorld Orlando. The film included testimony from former SeaWorld trainers and cetacean specialists, who argued that Tilikum’s stress directly led to his aggression towards humans.

5 Responses to The Great White Shark Vs. Orca (A.K.A The Killer Whale)

I really digged research into this topic,hope you enjoy it!

I forgot to mention this,but you can comment who do you think won,and you can also make a story with them fighting eachother to the death.

Orca wins, easy. They've been known to hunt great whites in the wild.

TheLazyFish I asked u a question on Megalodon vs crocodylomorphs if wanna go there and answer it.

I would side with Orcas which are actually distant relatives of dolphins. I haven't heard of instances that TheLazyFish stated, but Orcas hunt and attack as a team. They are intelligent and have strength in numbers.

I have seen some do***entaries about them and they are amazing creatures- I will look into them actually besting a great white.

Easy to find on You Tube. Here is just a taste less than 3 minutes: