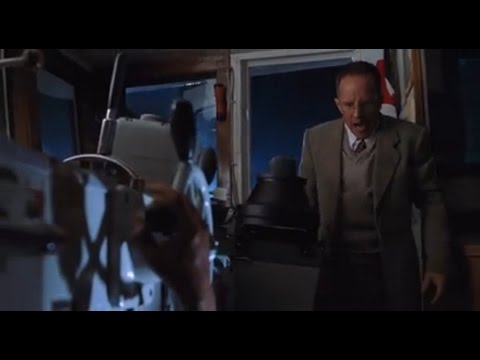 What happened to the crew of the SS Venture?

Am I the only one confused as to what happened to the crew of the SS Venture in jurassic park the lost world. I know the T-Rex was in the hold and probably got out before luring it back in and that explains the hangar doors being slightly opened but the hand on the wheel always bothered me. I don't think a T-Rex would leave behind just a hand and I don't know why but I always thought it was the cause of velociraptors.

5 Responses to What happened to the crew of the SS Venture?

I think in a deleted scene some Velociraptors got onto the ship.

Klayton Fioriti explains it. It's the Buck.

Raptors were implied in concept art, but not in the shooting script. No other dinosaur was on the ship except for Buck, and you can see his trashed containment cage on the deck when everybody inspects the wreckage. The narrative describes the T. rex going into a coma-like state due to the drugs Roland gave him, so the guys on the ship gave him something to counteract those effects, which woke him up and he went on a short rampage before he was somehow lured into the cargo hold.

I always got confused at this bit because I never understood how the T-Rex could reach him through the door. Also If it was Velociraptors why where there no other dinos on the ship, surely they wouldent transport a T-Rex and Velocipartors together. That's just an accident waiting to happen. (sorry if i mispelled Velociraptors)