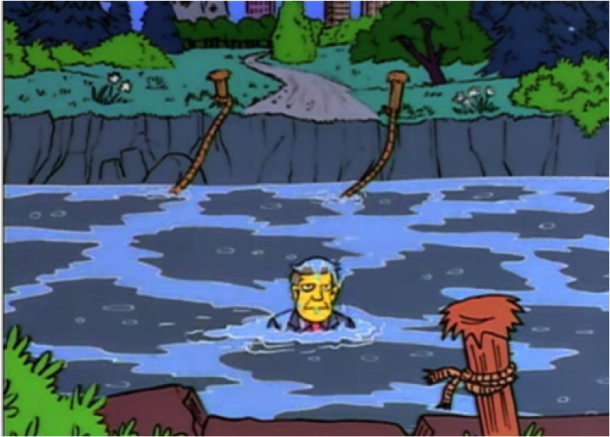 Okay I’m turning to the pros here as The Simpsons boards think this scene is a riff from West World... but it’s not.  In this scene, Skinner is chasing Bart. They come to the river.  Bart crosses a rickety foot bridge, which Bart cuts down.  Skinner pauses momentarily next to the downed bridge/river bank and proceeds to walk UNDER the river and exits it on the other side unscathed and still determined.  This scene is from a sci fi movie I saw as a kid.  I believe it was a robot that perused the protagonist in the movie.  I had nightmares about it for a week. Anyway I’m totally obsessed with finding out the name of the movie this scene was based on... please help me!

I think it references West World with Mr. Brenner. That is an iconic film.

You need to think hard and research some things- color or black and white, any actor or actress names, character names?

Thanks for the reply dk!  I've seen original movie West World a couple of times back in the day, and I watched the entirety of the chase scene much more recently just looking for this scene.  But I'm quite sure the Simpson's river scene is not from WW (original or new series).  In the movie (or perhaps Sci Fi series - I've poured through Outer Limits episodes too looking for this), the robot chasing the protagonist acts like a robot - stiff walking and all - and heavy enough to not be swept away while walking under the river.  The movie/episode was black and white. I believe it was also raining in the scene.  I was like 10 years old (so that's over 40 years ago) when I saw it and of course recall no actors or character names.  All I have is the incredible, haunting image of the 'unstoppable robot'* pause briefly at the downed-bridge, and then walk slowly, determinedly down its bank and under the water to reappear on the other side, devoid of emotion and determined to catch its pray.   *In the Simpson's chase scene, as Skinner emerges from the river, Bart says something to the effect of "...he's like some kind of non-giving up school guy..."  I've searched ad nausea using terms like "unstoppable..." thinking that phrase was a clue to the scene's origin - but no luck so far.

A bit more detail... The original scene was in and 'older' movie or episode.  So I"m thinking the original is of late 50's or early to mid 60's  origin.  And I"m not sure, but I think it took place on another planet and the protagonist is trying to get back to his spaceship. I'm far less certain of these details as I am of the river scene -which is indelible.