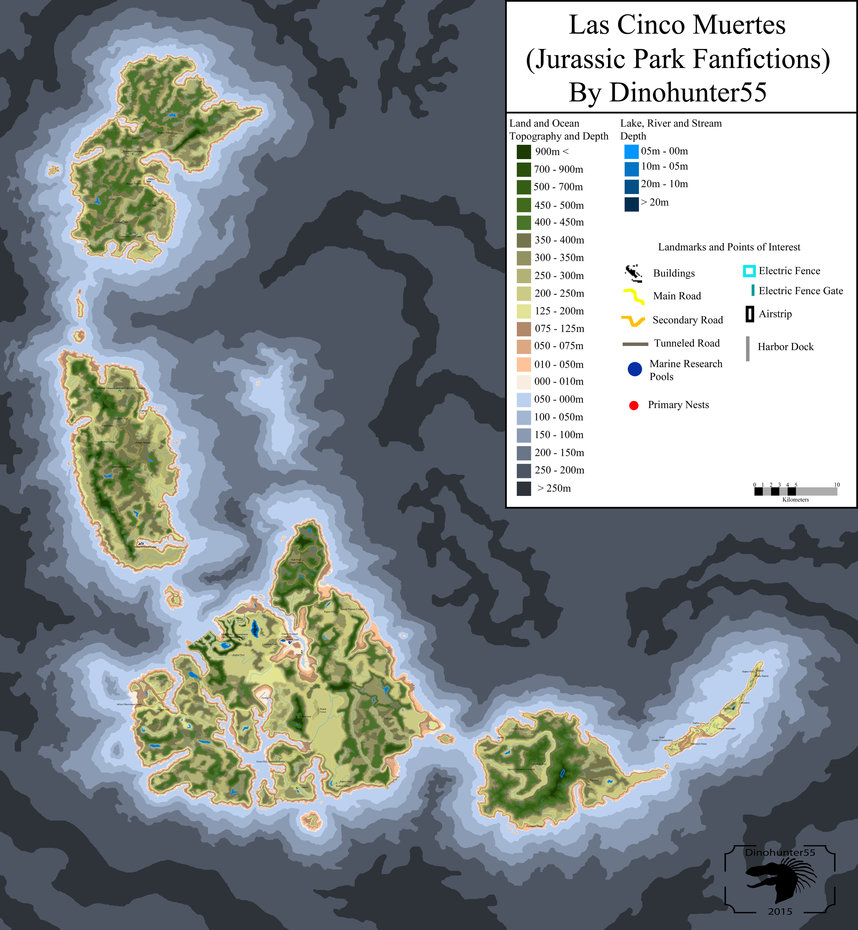 Las Cinco Muertes also known as The Five Deaths is an island 207 miles off the coast of Costa Rica, 87 miles away from the Park Island of Isla Nublar. Las Cinco Muertes is comprised of Isla Mantanceros, Isla Muerta, Isla Sorna, Isla Tacano, and Isla Pena.

Our story for the time being will take place on the eastern half of Isla Sorna. The tall yellow grass stretches as far as the eye could see..till it meet the more temperate rain forests that surrounds the tall grass border. Within the Tall Grass resides an abandoned human village filled with rickety buildings, unpowered electrical fences, and decaying cars. Tigerfang, a male Velociraptor antirrhopus nublarensis stalked it's creator's village. He remembered this place as far as he could remember, this was his birth place where his mother's pack once brood here but it hasn't been the same since the humans reappearance all those years ago.  Tigerfang remembered seeing his mother, farther, and uncle leaving the nest to chase three humans. His mother and farther chase two female humans in a rusty old shed while his uncle chased a male human into a gas station. Tigerfang moved closer to the shed, he saw where his mother and father were digging, he ventured around the shed and saw where the humans have also dugged before walking around the shed further to where he saw the mangled skeleton of his father, impaled by a spike. Tigerfang hooted sadly before leaving his old nest for good.

Gar growled gutturally as he confront this suchomimus. He didn't mind the rising water, both Spinosaurus and Suchomimus are comfortable in the water. The Suchomimus flayed her arms out as she starts grunting her territorial display but the Gar wasn't intimidated, he roared at the Suchomimus before attempt to slash at her with his claws. But the Suchomimus wasn't no push over, she snapped her jaws at the larger spinosaurus. A large wave crashed upon these two beasts as they continue their squall.

I'm coming back to finish the story, any suggestions?

Unaware of the storm that ravaged the northwest coasts of Isla Sorna and Isla Muerta, Tigerfang caught the scent of a herd of dryosauruses just north of where he was standing. He carefully made his way into the tallest underbrush as he stalk the relatively peaceful dryosaurs. The Dryosaurs were just grazing on the nearby ferns plants while their sentries we constantly on the look out.

Thunder could be heard echoing in the sky above, rain lightly fell upon the forest before it came down hard. The Dryosauruses were alarmed, Tigerfang took his chance to attack, the Dryosaurus sentries groaned and chirped as the Velociraptor leaped out from his hiding spot and tackled one of the sentries. With a quick bite to the dryosaurus'es neck, the other dryosauruses quickly stamped away looking for shelter from the rain and predators.

The blood's scent was masked by the rain fortunately allowing Tigerfang some peace but something else was drawn to the carnage. A frightened stegosaurus that was spooked by the thunderstorm came trotting by and Tigerfang was in his direct path.

Firestreak bolted out when he saw the Dryosaurus and the Homalocephale herds being disturbed. Among the fleeing herbivores was alone tiger stripped Velociraptor and a charging Stegosaurus. Firestreak reacted fast, he managed to catch up to the stegosaurus before leaping on to its ribs. Firestreak dug his sickle shaped toe claw deep into the stego's thick hide. The stegosaurus groaned as it stopped short from trampling Tigerfang. The stegosaurus jerked side to side attempting to shake off the darker velociraptor.

The stegosaurus stomps furiously into the soft ground, its trumpeting groans could be heard throughout the jungle. Firestreak attempts to hold on but was soon dislodge from the angry stegosaurus, he hits the wet muddy ground with an audible splash. The stegosaurus was still thrashing about groaning in pain. Tigerfang hissed at the stegosaurus to get its attention before Firestreak did the same, both velociraptors flare their forearms to intimidate the injured stegosaurus into fleeing. The stegosaurus turns around, Tigerfang takes some steps back but Firestreak bolts forward. Tigerfang immediately snaps his jaws at the younger velociarptor, Firestreaking glances back at Tigerfang to bellow a hiss before snapping his head back only to see the stegosaurus wasn't retreating... it was readying its thagomizer to strike at any theropod dumb enough to attack it.

Tigerfang twitches his eyes to signal firestreak away from the stegosaurus. Firestreak not understanding Tigerfang's eye signaling, just gives him a quizzical stare. Firestreak turns his head back to the stegosaurus then back at Tigerfang before realizing the gesture. The two very different velociarptors subspecies retreat into the forest.

I need to make banners for each chapter for this series

The two tyrannosauruses have since retreated under the forest canopy to escape the downpour, lightning slashes across the midnight sky as its thunderous roar followed soon afterwards. The trees began to sway side to side as the rain intensifies. Junior growled as a tree branched fell on his massive snout, his companion the female Regina gently removes the branch.

A herd of scared hadrosaurids in forms of Parasaurolophus and Corthyosaurus came stampeding through the redwood forests, fleeing from something big. Junior slowly rose to his feet, it has been many years since he last seen these hadrosaurids in such large groups. An all too familiar roared echoed through the forest, Regina rose to her feet as a large theropod dinosaur with a huge sail on its back approached the wary tyrannosauruses. It was the spinosaurus Gar and he was hungry, he sniffs his new surroundings; his nose catches the scent of an all too familiar foe. Gar didn't like tyrannosauruses, not only did he compete with their kind for food but Gar being the only member of his kind to have been resurrected, saw everything as a potential food source.... including his former handlers.

Junior and Regina remembered this creature, Gar was a glutton; he would eat more than any other large predator and even kill when he is not hungry. Junior step forward to roar at the spinosaurus, Gar roared back in confidence before Regina started roaring at Gar. Gar swung his head towards the female, giving Junior the opportunity to strike first.

This is intense. I haven't felt this invested in a story like this since the first chapters of your Gojiverse. Classic Xenotaris. :) ;)

I can't wait to see how this all connects. I'm so excited. :)

I need to refocus on the kaiju themselves in the Gojiverse. Thanks for liking this, :)

What Gaming Means To Me just surpassed 1,000 views!

M.U.T.O. started a new discussion: Muto Prime vs Kong, who would win? on the Godzilla Movies forum