I have had people asking me whether or not Nequit is stronger than the Indominus rex, so I thought a fight would settle the dispute. 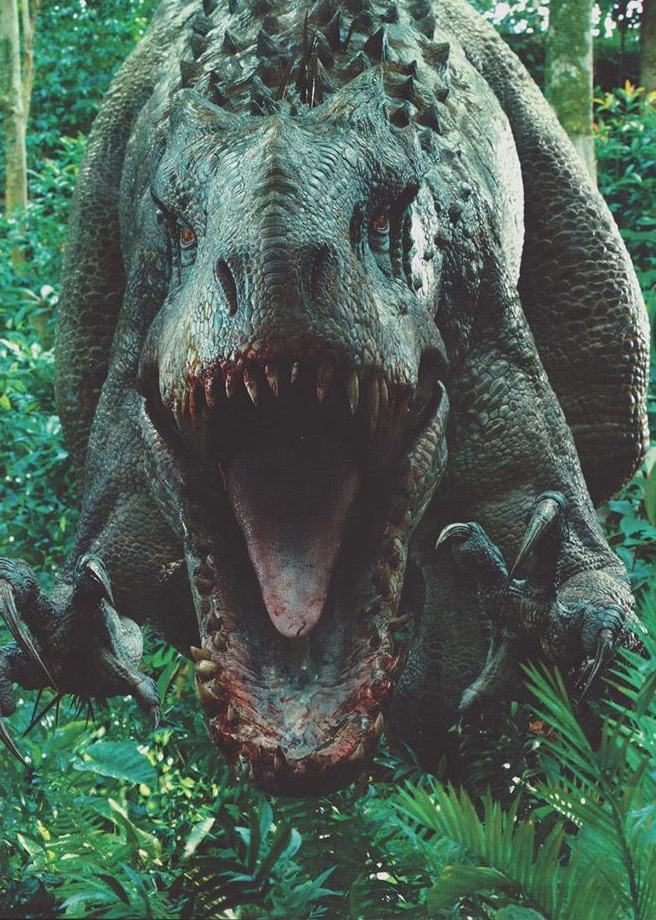 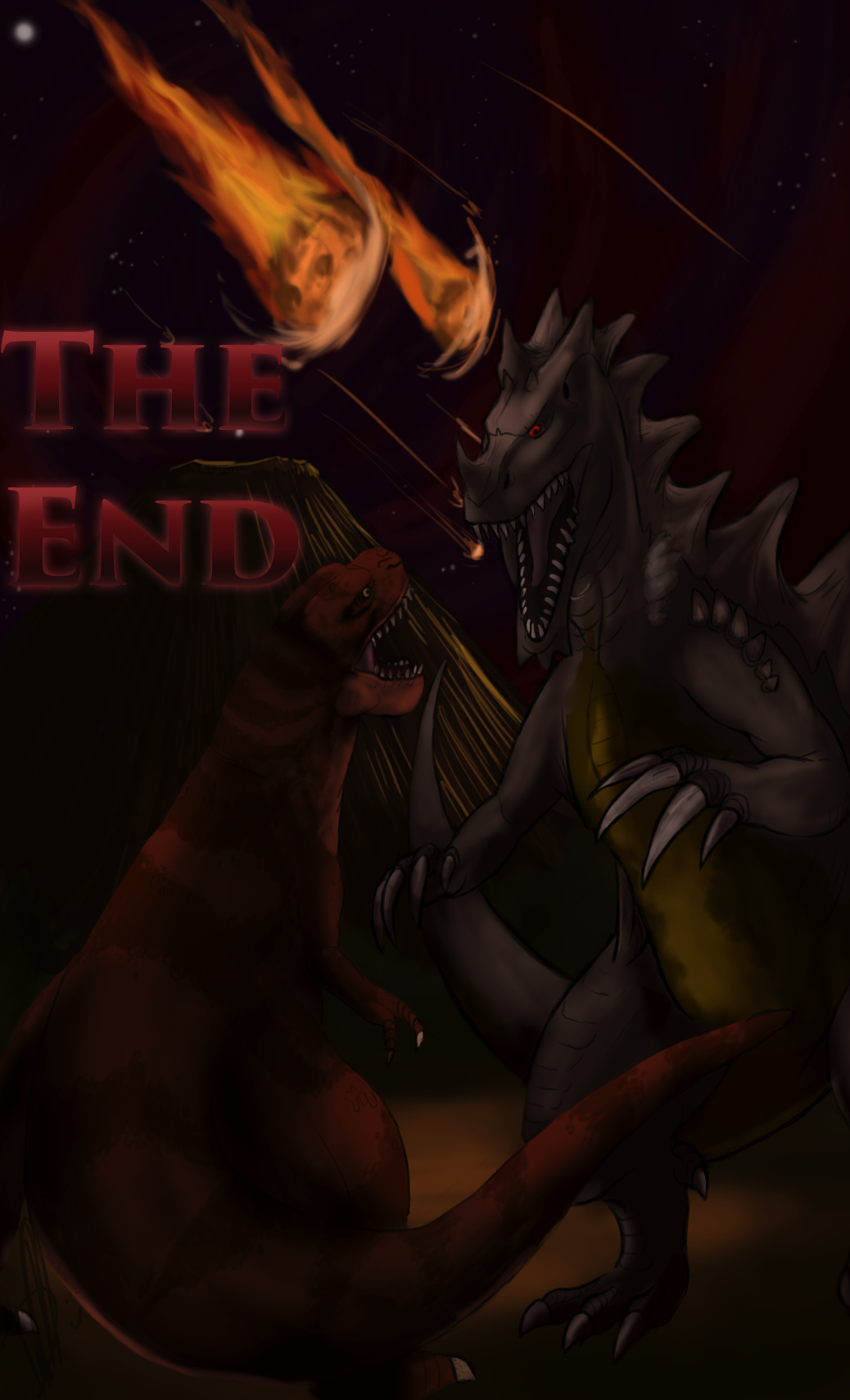 Beast on the right

Abilities: The smartest dinosaur to ever exist, walks upright which gives him intimidation and better vision, near instant regeneration, two long arms with four claws, and because he is a mutant--there may even be more abilities

Isla Nublar, somehow they got hold of Nequit's DNA--and he has gone rampant across the island.

The air was humid, fitting for the tropical island of which chaos seemed to ooze from. Tall tropical trees and ferns swayed, as a harsh wind blew by them; yet, the land seemed dead--as a half-mauled Edmontosaurus carcass sat, uneaten. Large slash marks covered the corpse, some of which blood still dripped from--and two of its femurs were missing. Only one beast could have done this, the only one vicious enough--the pale-white demon, Nequit Dominum.

The demon that is Dominum was devouring the two femurs in the nearby undergrowth--his psychotic eyes frantically looking around, as though he was an Alphadon surrounded by Acheroraptors. The beast swallowed the femurs whole, before stomping into a sheltered covering in the woods--for he had laid a trap.

Nothing gave Nequit Dominum more pleasure than killing a carnivore, he loved the thrill it entailed--even though only one predator was a match for him. Luckily for Nequit Dominum, that one predator--known as Tyrance, was not around. Dominum sat as a theropod would in wait--anticipating the arrival of a carnivore--but little did he know one he was not expecting was already there.

Dominum waited for four-hours, before leaving his covering and walking towards the carcass--confused that a Tyrannosaurus or Spinosaurus hadn't shown up to feast. Nequit Dominum stomped over to the corpse, each step reverberating through the forest--and sniffed out the animal, making sure it wasn't overly rotten, or that his scent was coating it too much.

However, rustling from a nearby grouping of laurels and ferns emanated through Nequit Dominum's ears. The Unstoppable Lord knew something was there, and in an act of pure cunning pretended like he did not by walking around aimlessly. The predator in the bushes took this as an opportunity, for it had known about Nequit Dominum--and wished to prove itself as the true unstoppable lord.

Like lightning, the carnivore burst through the bushes and bellowed a deafening coo--revealing itself as the Indominus rex, the Untameable King. Nequit Dominum slowly turned to face the creature, and grinned with delight upon seeing her--for he too had longed to destroy his only rival on the island. The lord and king encricled each other for a bit, snarling and clamping their jaws to instill fear--but neither stood down.

Nequit Dominum was always an impatient beast, and with a coo like that of a crocodile and T.rex--charged the Indominus. The Indominus rex sidestepped Nequit and clamped onto his arm--but the demon was prepared for a wound, and stomped on her foot, before slicing her back with his katana-like claws. The Indominus rex bellowed in pain, but she was nowhere near defeat--as she rammed her abelisaur like skull into Nequit Dominum, and sliced up his arms with that of her own.

Nequit Dominum was actually impressed, and chirped giddily--before retaliating. The demon performed a fake-out, acting like he was clawing her with his left arm--when he actually was with his right; Nequit Dominum impaled his jagged claws into the Indominus's back, before clamping onto her neck and hurling her aside. The Untameable King cooed in pain, as more blood dripped from her body than it had in her bout against the T.rex--she knew she had to end the fight now.

The Indominus rex bellowed, before rushing Nequit and clamping onto his forearm. The demon chirped in pain, as he felt his bone break in an instant--but that was not all, as the Indominus shoved him back with her torso. Nequit stumbled back, dazed and confused; he had not been taking this fight seriously, and pure rage filled his body as he realized he had suffered an injury.

Somehow she was still breathing, but this would not last long--as Nequit walked over to an Allosaurus sized rock--and lifted it up with ease. The demon then, with haste, smashed the rock into the Indominus rex's skull--breaking it in an instant. It was over, Nequit Dominum had proven himself as the one true Unstoppable Lord--and with no Tyrance on this cruel island, it looks as though he won't be stopped.

Hope you guys enjoyed this short fight! Of course this is all uncannon, as Nequit was never brought back--but its cool to imagine how a fight would have gone! Thanks for reading, and comments are appreciated!

Savage! Was kinda hoping for the Indominus to put up a bit more of a fight!

Remember that chap, I forget his name, he climbed Everest without any oxygen, came down nearly dead. They asked him, they said "Why did you go up there to die?" He said I didn't, "I went up there to live".

^Thanks man! I wanted to show how much more powerful Nequit is than the Indominus; based on his sheer raw power and abilities, the fight doesn't last that long.

I always envisioned this fight in my head after reading The End, great job!

^He is the main villain in my seven-chapter novella, The End. It's a dinosaur story, revolving around the KT extinction. You should check it out if you have the time!

Okay thank you for the clearence sir :)!

Oh and also one thing!What is this empire ruled by Lord Tyrant?

You mean Empire ruled by me?

?I am very confused?Well never mind