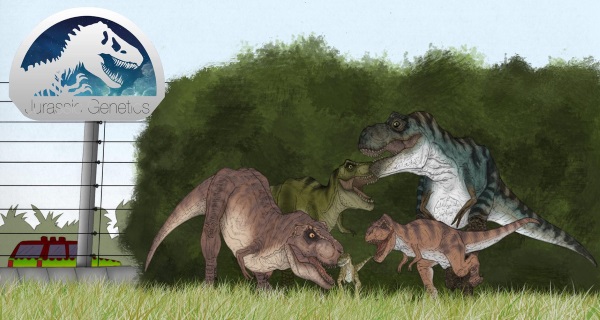 InGen's Tyrannosaurus are quite different than its prehistoric counterpart since they have a boxier skull and an increase in intelligence a trait shared with all InGen's dinosaurs. Okay the basic differences between the rexes is there sexual dimorphism: Female Tyrannosauruses are brown, Rexy and Doe being a prime examples. Male Tyrannosauruses are green in coloration with Buck and Junior having realistic green shade coloring to their somewhat brown-grey skin while Rouge or "Mr. Green" is cartoonishly green. Due to the increase in the T. rex's intelligence increased their aggressive protectiveness of their offspring to vengeance taking levels. We see this in The Lost World but also we see they do have the intellectual capacity to recognize the difference between friend from foe as seen in Rexy in Jurassic World.

who is the bluish rex

Did anyone notice that Rexy is larger than her Sorna counterparts?  I think this may be because she is the largest predator on Nublar.  The Isla Sorna T-Rexes live with the Spinosaurus and other carnivores.

Wait I thought Buck was the largest Tyrannosaurus in the Jurassic Park universe, seeing as Doe is based off of Rexy

Uh, besides Rexy's skull being a bit larger the skull size width and size is the same as a real T.rex. Tyrannosaurus has actually been shown to be one of the smartest dinosaurs, if not the smartest on par with modern mammalian predators.

So don't see that much of a difference between Ingen and Earth lol.

The InGen (which is on Earth too) Tyrannosaurus is genetically modified form of the original/real/prehistoric/pure Tyrannosaurus DNA.

But I got my facts about Buck being larger than rexy from watching the makings of The Lost World: Jurassic Park. All I was saying that InGen (International Genetics technology) modified the tyrannosaurus in several subtle ways different from its baseline counterpart from 66 million years prior.

Tyrannosaurus's intelligence is debatable but it is clear that T. rex was smarter than the other large theropods. Although I'm in favor of Tyrannosaurus being smart.

I understand now what you are trying to say. Very cool topic!

Thanks, I would like to make more Jurassic Park lore related topics.