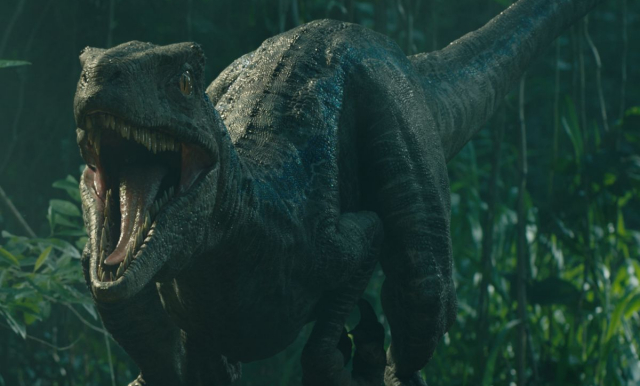 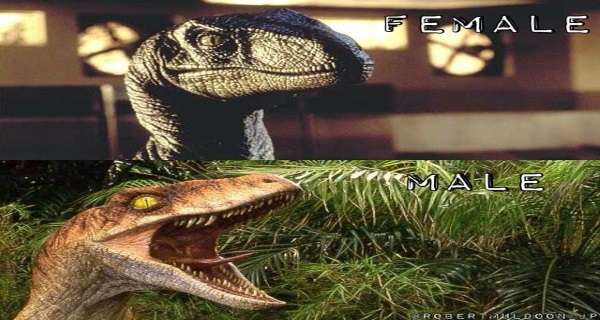 Okay I've decided to open this up to clear things up for people. InGen's Velociraptor are divide up into two subspecies of Velociraptor antirrhopus (North American Veloicraptor hasn't been renamed to Deinoychus in the Jurassic Park Universe): Velociraptor antirrhopus nublarensis (These are the raptors we see in Jurassic Park as the females and in The Lost World as the males although we do see one female in the group that attacks Ian, Sarah, and Kelly. The Raptor Squad may be an odd variant of the Nublar Raptors since they resemble them in body shape and in vocal range however they seem to be less aggersive than the original V. a. nublarensis) and Velociraptor antirrhopus sornaensis (The Raptors of JPIII, noy only are they radically different than any of the Raptors potrayed in the Jurassic Park series but they have a more devealoped social structure, less Aggersive behavior with more cooperative behavior, and they essentially have a language).

Now if one is smarter than the other is a matter of debate but I believe they both have capabilites of sapient behavior but I like to compare the two subspecies to Homo erectus and Homo neanderthalensis. But what do yall think?

Could you do a discussion on the JP Tyrannosauruses? I think they're closer in size to Tyrannosaurus imperator.

I'm not sure if Tyrannosaurus imperator is a valid species or an Engineered one but I will like to dicuss Jurassic Park's T. rexes soon. But right now I would like to discuss the two Raptor subspecies. Okay there is a large part of the fandom that theorized that the Velociraptor antirrhopus sornaensis (JPIII Raptors) were the first of InGen's raptors but then Dr. Wu engineered a second subpecies of raptors that weren't nearly as intelligent the ending result is Velociraptor antirrhopus nublarensis, they substituted intelligence with heighten aggression although the Big One was abnormally smart for her subspecies she was even sadistic like Indominus rex. The Nublar raptors usually bite each other to force the others in cooperation this is evident when the Male and Female nublar raptors fail to kill Sarah in The Lost World when the male fell off the roof and landed on the female. This is also seen in Jurassic Park when the Big One established her dominance over the over raptors by killing all but two of the others and even then she could be seen snapping at her subordinates.

The Sorna Raptors seem to be better at Communication as they use communications to make the other Raptors fall back in line without getting physical. These Raptors also seem to hunt better in a more tactical way seeing they are capable of setting traps by playing on the human's emotions or curiosity. While Nublar raptors tend to be more direct in their hunting approach with the exception of the Big One who showed she was capable of setting a trap for Muldoon by using one of her subordinates as bait.

I always took it as living in captivity and living wild. While under captivity, they were feed so there was little to know social skills needed besides who is Alpha and eats first. Lost World they have a more develop since or social skills because they left to fend on there own. They have their territories, nesting area and hunting ground established. In JW I was a bit confused. I thought they had recaptured all dinosaurs and put them in captivity but then they said Chris had marked them since birth and was the Alpha, so does this mean all other raptors have died out or are they still running around somewhere. I would of been cool if there were two raptor packs going at it.  Chris's pack and indominous's pack!

Hmm that is a good theory however the Raptors in Jurassic Park 3 do have anatomical differences that separates them from the Jurassic Park, The Lost World, and Jurassic world raptors. Because the JP, TLW, and JW raptors heavily resemble each other, skin color aside. But I still think the Big One is a genetic anomaly since she was the most dangerious velociraptor they transported from Site B while Owen's Raptors were breed in Jurassic World however its mentioned in the wiki they had other raptors before the Raptor Squad, one even resembled the Big one but she was destroyed for being too dangerous http://jurassicpark.wikia.com/wiki/Subject_V-2

@Xenotaris, you're right, T.imperator is an invalid species.  From what I can recall, it was announced as much larger than Sue, but then upon further examination, it was found to be slightly shorter in body length than Sue, around 12.2 m and had a more slender build.  We now know that specimen as Peck's/Rigby's Rex.

@Ht27str, that's the proper view to take on this.  Those nublarensis individuals that were left on Sorna apparently learned pack behaviour themselves, and they probably bred, so that original generation passed down whatever knowledge they had to their young, or their young learned to do things better than their parents.  However, because those wild raptors are WILD, it would have been easier to have bred raptors under human supervision so they'll be easier to handle.  They wouldn't be able to do that with wild raptors, and there would be too much effort to transport hyper-aggressive carnivores.  So those populations are probably still on Sorna, just like the Spinosaurus I bet.  And Masrani's people probably left some herbivores on the island to sustain those carnivores, since it was deemed a biological reserve and shouldn't be touched, even though Masrani messed with the situation enough as it was.  Masrani never came across as that greedy though.

It seems the Jurassic World raptors were an "enhanced" version of the original Nublar Raptors (Long-grass variant included) while the Sorna variant seems to be a new batch according to the DPG. InGen and some members of Masarani were doing some very Illegal **** between The Lost World and Jurassic World

Godzilla Generations was a beautiful game! I loved the fact that there's a laser cannon inside of Dr. Serizawa's eyepatch.

^It's explained that Blue was modified to express traits like empathy, which is why she's noticably less aggressive than previous Raptors.

I was talking to Xenotaris.

Godzilla Generations was a beautiful game! I loved the fact that there's a laser cannon inside of Dr. Serizawa's eyepatch.

I made a goof, I read about the raptor versions from the Jurassic Park wiki, sorry.

Top Comics on Sports That You Just Have to Read just surpassed 1,000 views!

Xenotaris replied to Does anyone want to see Buck, Doe, and Junior again?