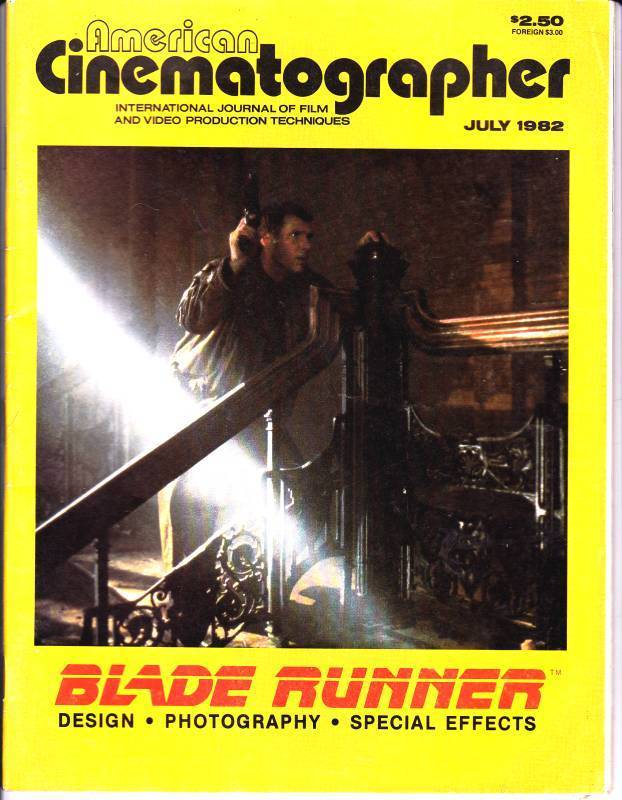 Bonus links:
Cinematography of BR
The Remembered Sights of BR

NoobMember0 XPAug-09-2013 2:26 PMthanks I have the original of this magazine and well loved it is too. the film goes way beyond what was expected of a normal cast and crew, to the point of Renaissance art and hidden depths not perceived with a viewers eye but rather a watchmaker that can see every turn of every cog so that the hidden art in this film comes from the technical skills of Cronenworth, Dryer and the art school knowledge of old masters seen in Ridley's other film 'The Duelists and through his mind's eye. one more reason that this film could never be replicated (sic) because it is less about technology and more about capturing the handmade art of the past. cgi could not capture the subtlety of decay, squalor, forgotten loneliness and shades of twilight when lights flicker into existence. if the eyes represent the human soul, the decaying technology and flickering lights represent the impermanence of the Replicants soul. this film wouldn't work if it wasn't for its twilight hues, lonely atmosphere and chiaroscuro lighting used to evoke a Rembrandt feel of claustrophobic darkness. fishkettlebanana

NoobMember10 XPAug-11-2013 5:58 AMNice article. Makes you realize how much work was needed to create the effects(even subtle ones). I like how it said they used mirrors to reflect light into the actors eyes....and the blimp was also used for law enforcement...GASP!! ;)

Since 2005, the American Society of Cinematographers (ASC) presents annually: "The Jordan Cronenweth Heritage Award" to one or more students enrolled at colleges, & universities in the United States of America, that offer film study curriculum. The ASC Education Committee offers many outreach programs to aspiring cinematographers, & other filmmakers. This particular award is dedicated annually to the memory of a cinematographer who made enduring contributions to advancing the art form.

Laszlo Kovacs (Chairman, ASC Education Committee): It is designed to encourage the next-generation of cinematographers to pursue their dreams. Jordan Cronenweth (ASC) was a gifted artist, & a courageous human-being. He created an enduring legacy of films that touched our hearts, & souls despite a debilitating illness. Which significantly affected, shortened his career, & finally claimed his life.

Jordan literally had to be carried around on the set of "Blade Runner" (1982), & suffered extreme physical/mental stress, during it's very difficult production. It's often said that artists do their 'great works' when in unbearable pain, spiritually tormented or under incredible duress. "Blade Runner" was undoubtedly Jordan's finest minutes on the silver-screen. He earned from the English, an equivalent of an American Oscar, from the British Academy of Film & Television Arts. And the BAFTA certainly got that right.

My favorite bit from the AC article is: "I keep telling them that the audience only goes to see the sex."

NoobMember0 XPDec-01-2013 8:36 AMJordan worked in Alien too with amazing perspective of the Nostromo corridors, that shots stunning me! Thank you Sawa!
Add A Reply