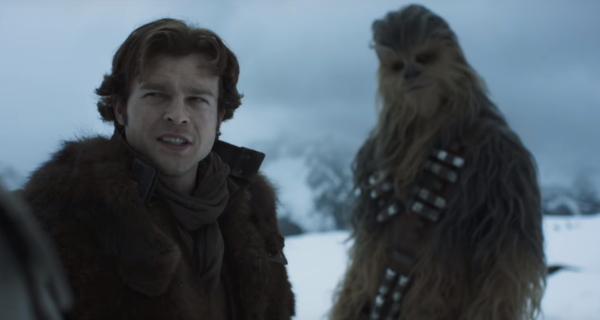 As promised, following the teaser that aired during this weekends Superbowl Lucasfilm have finally released the 103-second trailer for Solo: A Star Wars Story. What once promised to be a trainwreck of a movie following a plethora of behind-the-scenes dramas may let prove to exceed the expectations of fans and critics. Although with such low expectations for this movie, the probability that Solo should exceed them should be high considering it is directed by Academy-Award winning director Ron Howard, written by Lawrence (and his son Jon) Kasdan, and stars such recognized acting talent as Woody Harrelson, Donland Glover, and Thandie Newton...

Alden Ehrenreich's performance as Han Solo seems to lack the charm of Harrison Ford's portrayal in one of his most recognized roles, but with such iconic shoes to fill it was to be expected. Solo's trademark quick wit seems somewhat muffled, but with the trailer having a darker, dryer tone than expected it could be that the movie isn't as comedic as reports led us to believe. The rest of the cast and characters seem well placed and suited in what is on offer, including the ever-loyal Chewbacca and what looks to be Maz Kanata operating the Millenium Falcon's gun turrets (time-mark 0:36). However Game of Thrones star Emilia Clarke looks as out of place as she did in Terminator Genisys. In a time when movies are pushing hard for sexual and racial equality, Clarkes ability to win roles because of her youthful looks, and little much else is somewhat disconcerting.

Overall, the trailer is at most intriguing but it is far from as bad as we expected, nor as good as we hoped it could have been when the project was first announced. That said the bounty hunter (we presume, and pictured above) featured (time-mark 0:51) does look especially bad ass!

Ah, the pessimism is strong with this one...

Man, I did not like the trailer either, but at least open your ****ing eyes before you start writing bull****.

Maz Kanata? Dude, open your eyes: since when does Maz have four arms and is brown??

And why would Emilia Clarke look out of place? So she is only allowed to play one role in GoT, because everything else she does sucks?

The cinematography looks beautiful. I'll wait for the actual film to come out. Never judge a book by its cover.

The presumed bounty hunter's mask reminded me a lot of Darth Revan's and Kylo Ren's.