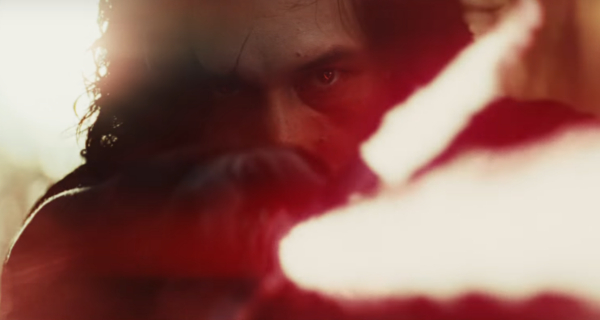 The first trailer for Star Wars The Last Jedi hit earlier today (watch it HERE) igniting a fresh wave of speculation among fans and movie audiences as to what it all means, and whether or not the movie can redeem some of the criticisms The Force Awakens bore upon its release. For the past few hours, I have checked and rechecked this awesome trailer and perused breakdown videos from other sources to bring you this analysis, verifying with intense scrutiny that everything included is as accurate as can be (with a little speculation), for a trailer breakdown...

As expected by many fans, Rey's arrival on Anch-To will lead to her being trained by Luke Skywalker. In these opening scenes, we can hear Luke using similar techniques to those that Master Yoda used in The Empire Strikes Back; telling Rey to breathe and asking her what see can see, as we see levitating stone fragments and Rey practicing with a lightsaber. Interestingly, this all goes against the trailers cliffhanger, in which Luke says "I only know one truth, it's time for the Jedi to end." But we'll come back to that.

During key moments of the trailer whispers from the original trailer can be heard. As we see General Leia from behind on the bridge of a resistance vessel her younger self (from A New Hope) can be heard whispering "Help me Obi-Wan...". Immediately following this we are shown Kylo Ren's destroyed mask, surrounded by shattered glass with Obi-Wan whispering "...seduced by the Dark Side". Finally, as we see a gloved hand tenderly touching a tired book page with the symbol of the Jedi Order very faintly, and slightly obscured Master Yoda can just about be heard whispering "...surrounds us, and binds us."

It was well established in The Force Awakens and echoed again in this trailer that Ben Solo was seduced to the Dark Side by Supreme Leader Snoke. Yet, how does the secretive leader of the "new empire" gain access to the son of a Resistance General who is being trained by a Jedi, and more importantly, why? The image of Luke's destroyed Jedi Temple in the trailer may actually be a clue. Such total devastation indicates hate, suggesting that Snoke may have a history with the Jedi. If the speculation of the majority of fans holds true and Snoke is in actuality Darth Plagueis, he may have adopted a new identity and befriended the Resistance, and thus Leia, Luke and Ben Solo, before seducing to Ben to the Dark Side, before revealing himself as the leader of the First Order and destroying Lukes new Jedi Order.

While The Force Awakens did have some interesting battles, none of them really compared to the classic Trench scene from A New Hope, the epic Battle of Endor, or even the Battle above Scarif seen in Rogue One. Thankfully it looks as though The Last Jedi will not suffer the same fate, with what looks like at least two epic battle scenes. The first, situated on an arid planet sees some new ships never seen before facing off against the First Orders Gorilla AT-AT's. These new Resistance ships seem to be purposefully dragging part of their chassis' on the dry ground creating a very striking red dust cloud in their wake. Will these new ships use the same technique Luke used on Hoth to take down the colossal walkers?

The second epic battle scene seems more familiar with recognizable, though obviously updated Resistance freighters, along with X-Wings and A-Wings facing off against First order TIE Fighters, in orbit above a blue-hued planet. While only the prelude to the battle between the new vessels versus the Gorilla AT-AT scene is shown, the footage of the latter space battle is in full on conflict with iconic laser blasts and howling TIE engines. Of course, there is also a brief clip of the Millennium Falcon facing off against a few TIE Fighters, though unfortunately it is not as emotionally charged or as dynamic as the epic loop we saw the aging ship perform in the first trailer for The Force Awakens.

Characters Finn, Poe Dameron, BB-8, Captain Phasma and Kylo Ren don't get very much footage in this trailer, which is very Luke and Rey heavy. Finn is shown in some form of stasis, Poe and BB-8 are shown aboard a Resistance freighter that is being attacked (spot the A-Wing), Kylo Ren is shown without his mask and a very fetching scar over his eye and Captain Phasma is seen with a battalion of Stormtroopers walking amidst some debris, possibly aboard the same vessel we saw Poe and BB-8 on earlier.

For Luke Skywalker to say "The Jedi must end", is almost blasphemous considering the history of the character. Throughout the original trilogy, Luke repeatedly iterated that he wanted to be or was a Jedi, like his father before him. And from what we know of Kylo Ren's history Luke took it upon himself to revive the Jedi Order before it was destroyed. Even then Luke traveled in secret to Anch-To to search for the first Jedi temple. Given his devout history combined with the knowledge that his father was believed to be the chosen one of Jedi prophecy, for Luke to denounce the order that so defines him means something of Rancor-sized proportions must have been revealed to him within the first Jedi temple on Anch-To. Lukes denouncement of the Jedi Order may explain his less than enthusiastic response to Rey's arrival in the closing moments of The Force Awakens. Yet, it appears that Luke does train Rey, although he may only teach her in the ways of the Force, and not include any Jedi doctrine in her training. Some have suggested that the final scene showed in the trailer features Yoda (force ghost, most likely) off-screen to the left, and it is to the grandmaster that Luke is talking. If true this would add even more gravity to Lukes words as for him to speak so bluntly to Master Yoda, who he revered, would only come following an epic scaled and very dark discovery.

What could luke have discovered? Do the Jedi have a dark past, a dirty secret? Could the Jedi, sensing the return of the Sith had orchestrated Anakin's conception? Was Snoke rejected and hunted by the Jedi? Did you spot anything I missed?

Can't wait for this film

Saying majority is going a little far with numbers.

Michelle Johnston replied to From Here To The Otherside
More Activity