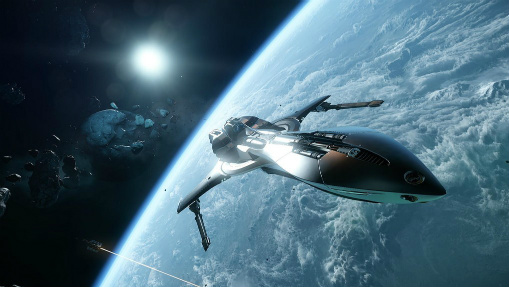 The upcoming game Star Citizen from director Chris Roberts has accumulated over $124 million dollars through various crowdfunding campaigns, making it the second highest-earning crowdfunded project of all time. And although there's been a ton of alleged problems going on behind the scenes, the fact that a new trailer has just been released indicates that production is moving along smoothly.

The new video showcases the on-foot first-person sections of the game, which you'll be experiencing when you're not soaring through space. Visually, it sure looks impressive, which is hardly surprising as Star Citizen is the first crowdfunded game that can truly be described as having AAA production values.

Star Citizen does not yet have a release date and is still a long way off, but we'll keep you updated as more updates come to light.

Yeah I'm a backer to that game, I have the Bounty Hunter ship called the Avenger.

I'm loving the look of the maps for this game. The weapon design is pretty sweet too. Thanks for the article, surprisingly I was not aware of this game before now.

I've got an Avenger as well. I'm not picking up anything else until the game gets further along into development. It's fun, but the Alpha is about as stable as a Jenga tower in an earthquake. Once the game gets past Alpha, I'm gonna pick up one of them Cutlasses, or maybe a Freelancer or Caterpiller. Pretty much any multi-crew ship with cargo space, firepower, and a way to board other ships. Space Commander Spacebeard, Pirate of Space needs to steal stuff. Might even give smuggling a try.