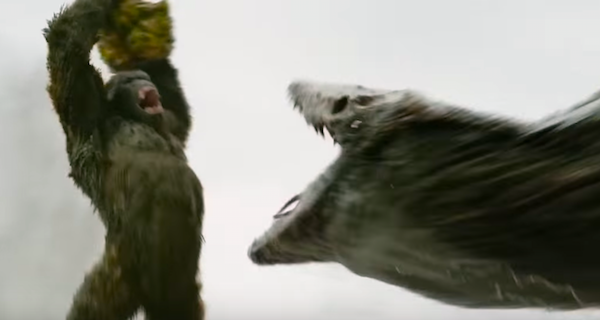 Warner Brothers has been full speed ahead with the Kong: Skull Island promotion. A new clip has been released of Kong using one of his favorite weapons from the Toho movies--A giant boulder.

The exciting new clip briefly features Tom Hiddleston's James Conrad running from a Skull Crawler before being rescued by Kong... and a rock. Take a look:

What do you think of the glimpses from Skull Island so far? Sound off in the comments below!

Hell yes! I love that Kong just comes out of nowhere to bring the smack down on the Skull Crawler. It was totally awesome. I can't wait to see this movie.

Agreed, this looks to be packed with action.

I am so stoked for this!

Kong seems much smaller here, especially compared to the shots of him fighting the helicopters. Surely there cant be more than two kongs?

I doubt there's just two Kongs, I think it's just about the mountains in the background.

Really? You interviewed one person and wrote an article on it? This term paper writing service never publishes unreliable data.

monsterzero9 replied to The Fate Of The Reiwa Series?
More Activity