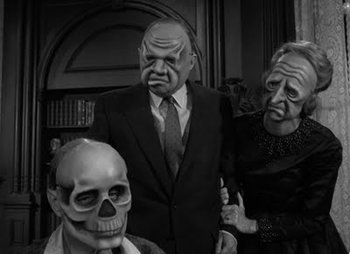 I think this has been done, but new members have shown up or may have missed it.

What solidified your becoming a sci fi fan?

For me, it was Twilight Zone, Star Trek and the Planet of the Apes. Creature Feature was a show that encompassed everything from Godzilla to Frankenstein.

But for the first exposure that rung my bell, it was Rod Serling's Twilight Zone.

How about you, Scified?

I can't really put my finger what was my first sci-fi. I think it was Jurassic Park, then Carnosaur, then Terminator, then Star Wars or Star Trek, then Spaceballs, then Alien

There's a lot of things that could've done it.

Maybe it was a video game? The two movies that probably had something to do with it are Jurassic Park/World and Godzilla.

It was Power Rangers!That brought me into Science Fiction.

This is Really is Tough..... my Long Term and Short Term Memory has Degraded over the Last Few Years.

So i find it hard to remember the Trigger, i am not sure there was any Real One Movie/TV Series but just in General i was into Sci-Fi (as well as other Genres) but Sci-Fi has always been a Strong Favorite, i would say sure TV Series like Star Trek, the Planet of the Apes as well as Various B-Movies from the Late 50's/60's.   I was really Impressed with WAR OF THE WORLDS as a Kid, but also Forbidden Planet.

But then so many other 70's and 80's Shows really got me interested, which Included Blake 7, Dr Who, Buck Rogers etc.  The TV Series V was a One of my Favorites too.

The first show that got me hooked into science fiction? For me, it was Red Dwarf.

It seems like some of us became sci fi fans without realizing it. They were movies and shows that were different from say, cop shows or sitcoms- although there was a place for them too but leave little to the imagination. Maybe it was the general "what if" or "that could actually happen" sense that we gravitated to.

I'm just gonna say Jurassic Park and Godzilla did it.

Comic books for starters. War of the Worlds as Big Dave mentioned and like dk, TV and film such as Star Trek, Planet of the Apes, The Twilight Zone and then Star Wars.

Lest I forget, I've been a life long Godzilla fan. (You folks remember Ultraman?)

The Land that Time Forgot was a favorite as well.

24bics Creature Features was a great Saturday afternoon show that showed everything from Godzilla to Creature from the Black Lagoon to Frankenstein. It was basically MST3K only with good movies and no heckling lol!

In my case it was watching Star Wars, Star Trek, Blade Runner and Alien. I've liked sci-fi ever since I was very little.

I think it was also the doing of video games that made me like sci-fi. Though I'm sure my love just developed overtime somehow.

For me, it was Jurassic Park, Primeval, and Prehistoric Park.

Jurassic Park. It is and always will be my favorite movie.