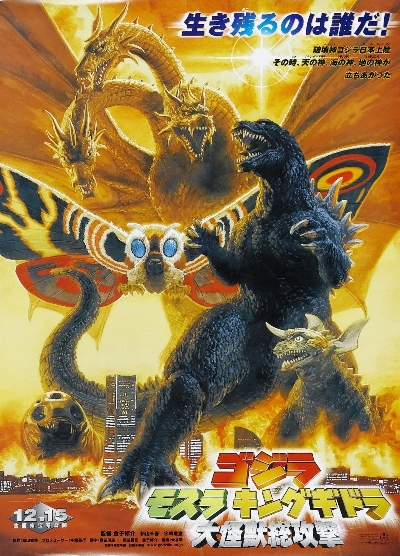 I didn't really expect to like this film as much as I did. Going into it with what I knew about it, what with the more mystical take on Godzilla and all, I thought I was going to see it and be like "Eh. It's okay, but it's not really my thing".

Surprise of surprises, I actually really enjoyed it. In fact, I think it's one of my favorite movies in the franchise now. GMK truly does live up to it's reputation.

The story, as radical a reinterpretation as it is, works quite well, and the theme of Japan forgetting or trying to ignore it's past were intriguing and well-done. I think displaying it in almost every teenager in the movie being a disrespectful, shop-looting, dog-drowning jerkwad might have been pushing it just a bit, but other than that, I like what they were going for with this one (side note, one teen girl's musings if Godzilla would make a good pet–just before he makes landfall outside during a storm–gave me a chuckle).

Kow Otani's soundtrack is absolutely gorgeous; a brilliant blend of orchestra and electronic music that gives the film a score that sounds both high-tech and ethereal all at once. It's absolutely beautiful, and I could listen to it all day.

Godzilla's design in this movie is absolutely fantastic, and his blank white eyes really drive home his more demonic nature in this film. I'm not too keen on how short and thing his tail is, or how almost cartoonishly large his feet are, but other than that it's one of my favorite looks, and I think it's a better "scary Godzilla look" than Shin's "Godzilla but he looks like a zombie" appearance.

Baragon's visual upgrade is great as well, and his new roar is quite memorable. Kind of a pity they forewent his fire-breathing/heat ray abilities; he might have lasted a bit longer against Godzilla had he had it.

I love the new purple highlights on Mothra's eyes and wings, and I honestly wish they'd bring that color scheme back in a future movie. Her ability to shoot stingers from her abdomen was pretty cool, and, as much as I loved her in KOTM, I think I would have rather seen that make a comeback.

Ghidorah is kind of the problem child of this movie; the other two we can buy as guardian monsters, but then we see this guy, typically Godzilla's greatest enemy, as a good guy, and it gets a little weird. Once I was able to stop thinking about it and just enjoy his role for what it was, though, I didn't have too much of a problem with it. I like his roar in this movie; a nice update of the classic "BIDIDIDIDIDI" that we all know and love.

As for my other thoughts, I think I would have liked to know a bit more about these other monster sightings that are mentioned at the beginning, aside from the obvious–and amusing–jab at the 1998 "Godzilla". I liked the relationship between Yuri and her father, Admiral Tachibana. They hit a few rough spots over the course of the movie, but it's clear that they love each other.

All in all, I thoroughly enjoyed this movie in spite of it's more radical reinterpretations of its kaiju characters, and I definitely see why it's liked as much as it is.