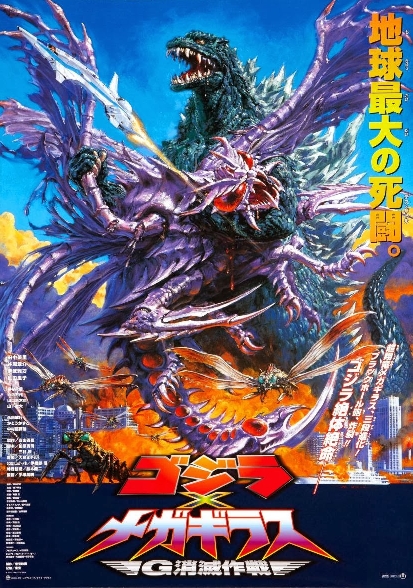 After my viewing of GMK, which I thoroughly enjoyed, I decided to take a viewing of it's immediate predecessor, Godzilla vs. Megaguirus. I'd heard beforehand from multiple fans that it's arguably the weakest of the Millennium era, and my viewing of the film proved them right.

It wasn't really a bad movie, per say. It just felt, except for a few key elements, a bit bland.

Having watched Godzilla Against Mechagodzilla prior to this, I can't help but notice the glaring similarities between Akane Yashiro of the former and Kiriko Tsujimori of this movie. Both are women in the military who lost a beloved superior officer to Godzilla, and hold a grudge against him as a result. Considering that this movie was made by pretty much the same people, it almost borders on self-plagiarism, although I think that GXMG handled the whole thing better with Akane.

Also, in regards to the death of Tsujimori's superior, let's be honest; that whole scene of the JSDF facing Godzilla in 1996 is dumb. The idea of only sending something like 12 soldiers armed with rocket launchers against a creature who's already proven to be resistant to heavy artillery fire is completely laughable; is it any wonder the mission was a complete failure?

I'm not sure what to think of Hajime Kudo. He seems okay, I guess, but I'm not exactly sure why the G-Graspers would bring on a self-trained civilian mechanic and inventor to work on something as complex as a black hole generator. And his software repair program, styled in a chibi version of Tsujimori, felt unfunny at best and stalker-ish at worst. On a more positive note, I admire his dedication to fix the Dimension Tide's programming when it goes haywire, doing the whole job with a fractured arm. His curry-on-rice microbot magic trick at the beginning was pretty cool too, and I really don't get why his young audience wasn't more impressed by the mechanics of the trick.

The G-Graspers themselves, apart from their GX-813 Griffon VTOL aircraft, which I thought was pretty cool, feel quite cheap compared to the various other anti-kaiju agencies of the franchise. Their labs are single-room and very compartmentalized, and it almost reminded me of the "showroom" laboratory seen in Jurassic Park. I do like their vibrant blue-and-black uniforms, though.

I think my biggest problem with the movie is that the Meganula swarm, and indeed, Megaguirus herself, feel a bit more like a minor inconvenience in regards to the rest of the story. Megaguirus herself doesn't show up until towards the end of the movie, and once she's disposed of by Godzilla, she and her brood are almost instantly forgotten. A more accurate title might be "Godzilla vs. a Black Hole Gun (co-starring Megaguirus)". The majority of the film seems to revolve around trying to get the Dimension Tide black hole generator working enough to kill Godzilla. And really, while a black hole gun sounds awesome on paper–and just in general–it actually strikes me as a bit overkill, even for Godzilla.

The above being said, this movie wasn't without its enjoyable factors.

The Meganulon get a visual upgrade from their first appearance in 1956's Rodan, and an adult form in the Meganula. I quite like both creatures, and I wish that they had more to do in the film overall, like more scenes of them facing the JSDF in the flooded streets of Tokyo. They already proved to be quite scary under the right circumstances, particularly when one of them slaughters an unsuspecting teenage couple in one of the most brutal scenes put to Godzilla film.

I also quite liked Megaguirus herself. Her design is suitably menacing, and she has quite the personality to boot. She seems to relish in tormenting Godzilla with her speed and agility, and outright smiles when she drops a chunk of building on top of his head. My only complaint is that she has very stiff movements, and it's a bit disappointing.

The fight scenes in general, both Godzilla vs. the Meganula swarm and later Megaguirus herself, are entertaining to watch, and are undoubtably the best parts of the film. Highlights include Godzilla shearing off one of Megaguirus's claws with his spines, Megaguirus pulling an ever-hard-to-come-by kaiju jump scare, and Godzilla bodyslamming Megaguirus in one of the most comically awesome moments since Godzilla vs. Megalon's infamous tail-slide-kick.

Michiru Oshima's score, while not as good as that of her later works in Godzilla Against Mechagodzilla and Godzilla: Tokyo S.O.S. is nonetheless very well done and quite memorable.

All in all, Godzilla vs. Megaguirus does have it's enjoyable moments, but the film as a whole is just so-so.

Other Godzilla vs. Megaguirus Reviews